The Rock’s Recent Breakfast and a Motivation Boomerang

While he’s currently shooting the Baywatch movie, The Rock has officially started preparing for his next gig. With filming for Fast and the Furious 8 set to begin next month, he’s been bulking up to reprise his role as Luke Hobbs, and recently shared a photo of his breakfast on Instagram.

When it comes to actors getting ready for a role, it’s easy to have visions of fancy meals prepared by private chefs. But this photo doesn’t quite fit that picture. Packets of Instant Cream of Wheat and reheated buffalo steak and eggs is what the Big Man is using to fuel his latest training. As I’m still following a Rock-inspired diet, here was my breakfast the day he shared this photo.

The Rock’s breakfast on the left, mine on the right.

Frankly, I think my breakfast looks a little fancier. Of course, I’m my own private chef. I also didn’t eat this while working at my laptop at 5:30am, which is why he continues to be the “Hardest Worker in the Room.”

Motivate You? No, Motivate Me.

Shortly after I finished the Rock’ing for 30 Days Challenge, I got a message on Twitter from a guy on his own fitness journey. John had struggled with his weight on and off for years, and had decided to get serious about getting in shape and dropping weight. While I had nothing to do with his motivation and discipline to start that journey, this blog did inspire him to start a daily blog himself. Two months and 53 posts later, he’s still at it, and has dropped 30lbs so far!

After a congrats from me on Twitter, he inadvertently shamed me about my weak attempt over a week ago to get back to my blog. Seeing his dedication, I woke up inspired to get another post out today.

While I’m sure I’ll fall down again many times, I’ll just keep getting back up and keep trying to get after it. 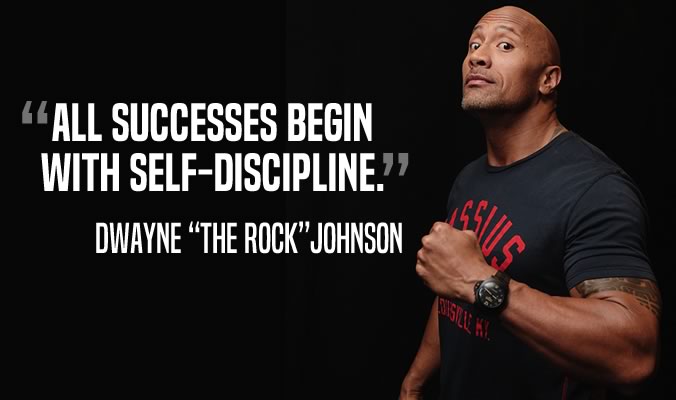 There is nothing “Rock’ing” about not writing a blog post for 30 days.

When I did the original 30 day challenge, I modeled the eating and workout plan after what The Rock did to prepare for Hercules, which he had described as “the most grueling, the most intense” training he had ever done. I made it 33 days, ending on March 4.

Though I haven’t blogged in a bit, I haven’t stopped pushing myself. In the spirit of trying to work as hard as the Big Man himself, I have continued with a plan closer to what The Rock usually maintains. I’ve dropped to 5 meals a day (no cod!), 5 workouts a week, and dropped the daily cardio from 50 minutes to 25 minutes. I wanted to follow the plan for a bit before I shared it. I’ll be posting all the details next week.

Tumbleweeds for a Month

For me, the Rock Challenge wasn’t just about the discipline to do the eating and workouts, but also blogging. I have blogged on and off for years, but wanted to build the habit of writing more often. Blogging everyday was a part of the challenge for me. And I never missed a day during the challenge. But when it ended, I didn’t maintain that habit. I didn’t plan to write every single day afterwards, but definitely a few times a week. I totally dropped the ball here.

I Haven’t Been Writing Because…

When I was thinking about writing this, I was thinking about why it’s been so long. I reasoned it was because I have been focused on my business, or I haven’t had the time. But those are all just excuses. I just didn’t make it a priority. One big clue: I’ve watched more TV in the last month than I did during the challenge (during which I watched about 2 hours worth the entire month). Granted, I’ve only watched about 2 hours a week for the last few weeks. But if you watch any TV, you can never say “you don’t have time.” Eight hours a month is more than enough time to write.

Back in the Saddle

I want to continue to walk the path of hard work and discipline that The Rock inspires. I have in my diet, I have in the gym, and now I’m going to get back to it in my writing. If that guy keeps the Instagram/Twitter/Facebook posts churning out while being as busy as he is, I can get it done too.