I’ve officially made it past the three week mark. As has become a tradition each week, I thought I would share some quick stats of what the last 21 days has looked like:

Those numbers both shock and horrify me. Especially the amounts of eggs. I have a fairly meat and egg heavy diet to begin with and have always had excellent blood work. But it would have been great to do ‘before and after’ blood tests, to see what difference it would have made. It’s nothing I’m worried about, but it would have been cool to have some data behind it.

Get Your Bench On

It’s Monday, also known as International Chest Day (everyone likes to do chest on Monday’s and apparently The Rock is no exception). I haven’t done workouts that focus just on my chest since my 20’s, so it’s fun to do this for a change. 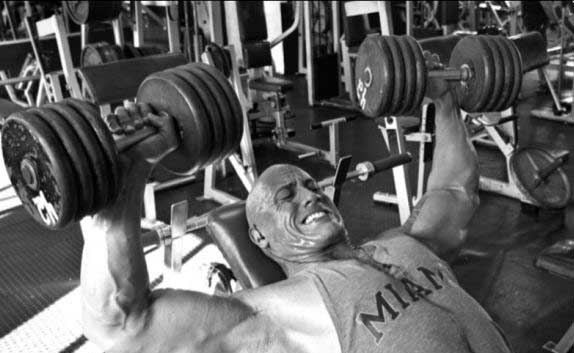 Everyone, including The Rock, does Chest on Monday.

The last exercise is what’s called a superset where you do two different moves each set. This one involves doing 15 cable crossovers, then as many dips as you can, for 3 sets total. The dips killed me. I had nothing left by the time I got to them. I was all shaky like when I started doing them for the first time two years ago. Overall, it was a good workout, and I left feeling exhausted yet strong.

When I was done, I had the thought: I only have one Chest Day left. It’s crazy to think this challenge is almost done. While I’ll be happy to return a certain sense of normalcy in my life, it’s been a great experience. Having 2-3 hours every morning to yourself to focus on your workout, listen to podcasts and think about your life and direction has been amazing (every parent will especially understand the “time to yourself” part).

My Weight So Far

When I did the reddit post, no one believed I wasn’t gaining any significant weight. On the surface, I find it hard to believe as well. I weighed myself again today. I was 208lbs. Technically I was 206lbs on the very first day of this challenge, but for me, 2lbs of variance is common and happens almost every week. For most of this challenge I’ve been holding steady at 207lbs. The last time I weighed myself was last Monday, when I was also 208lbs. I suspect that extra pound comes from rest day. I’ll try again in 2 days, and I suspect I’ll be back to 207lbs.

The most boring chart this month.

I messed up the Fitbit dashboard so the fancy graphic for the Weights section is missing, but the activity is captured on my Fitbit profile page.