Day 8: Back on the Wagon, Eating Fast, and Tummy Troubles

After what felt like a lazy weekend, today was the official start of Rock Week #2. It was Chest Day, and actually found myself moving weight up from last week. There was definitely some noticeable increase in strength, especially on the incline barbell press (for some reason). Overall, it was a good workout.

I have lost all awkwardness around eating in the gym. Each morning I happily sit in the lobby, headphones on, munching on my oatmeal and smelly-ass fish. It makes me wonder why I felt weird in the first place. I remember author Tim Ferris once mentioned:

“A person’s success in life can usually be measured by the number of uncomfortable conversations he or she is willing to have.”

Not that I’m equating being fine with eating at the gym with the secret to living a successful life, but it’s good to get better at being uncomfortable. There are definitely a few moments around this whole challenge that have made me feel awkward. Honestly, even telling people I’m doing this felt a bit uncomfortable at first. But that was sort of the point. This whole challenge is about getting me out of my comfort zone. It’s working, and I’m glad I decided to do it. 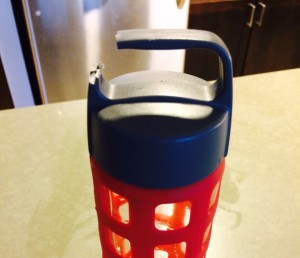 I eat three meals while I’m working. Stopping every two hours can be disruptive, not to mention the time it takes to actually eat. In an effort to stay productive, I’ve been eating at my desk while “working.” But in reality, this is dragging out the meal while I’m not getting much done. So today I tried actually stopping to eat while doing no work. I either listen to a podcast or read a longer article.

This was immensely helpful. I ate each of my meals in less than 10 minutes each. Getting to around 30 minutes of eating time (along with heating up my food, etc) is more than acceptable. This seems so counter to how you’re supposed to approach eating in general. But this diet is more akin to fuel. As long as it feels OK to eat like this, I’ll continue to do it.

Considering the amount of food I’m packing away, I thought my stomach would have had more issues. When I tell people about this challenge, it’s actually one of the first things everyone asks about. (“Are you in the bathroom, like, all day?”) But everything has been surprisingly normal. Until today.

I don’t know if maybe some of the fish I ate was a bit spoiled, or if this was the result of eating the same meals yesterday but not burning through it with a workout, but my stomach wasn’t happy. Not that I had any pains or that my stomach hurt. But without going into great detail, one word sums it up: frequent. No es bueno.

Things got better towards the evening, so I don’t think it will be ongoing. I suppose we’ll have to wait until next Monday to see if it’s the rest day issue. Sounds fun.

According to my heart rate throughout the week, it seems I’m already adapting to the cardio, so I decided to try one of the programs on the elliptical. I did one called “Fat Burn” thinking it would mix things up a bit. I checked my Fitbit, and it turns out that it did get me into the Fat Burn Zone for longer than I’ve been there previously (an extra 14 minutes). It felt easier overall, but those machine people seem to know what they’re doing.

Day 9: Bundling Up, Audio Books, And Why I Married My Wife