The Rock’s early rising to hit the gym is no secret, with the big man often sharing a snapshot of his morning alarm with his 46 million followers on Instagram.

His morning routine is to wake up early, throw back some coffee for his caffeine-fix, then do his cardio. This is followed by his first meal of the day, then hitting the weights (clangin’ and bangin’ in Rock-speak). He admits his workouts can get moved around based on his schedule, but for the most part, that’s the schedule he usually follows.

Does It Matter When You Work Out?

I’ve been getting a lot of emails and tweets asking about the specifics of the schedule, and whether it makes a difference when you decide to work out. Though there are numerous conflicting studies on the subject, there doesn’t seem to be a scientific consensus on different times of day leading to improved physiological effects from physical training.

However, the New York Times recently helped shed some light on the value of scheduling your workouts in the morning. There were two main reasons why you might want to do this. The first is that our willpower weakens throughout the day.

According to the Florida State University psychology researcher Roy Baumeister, one of the leading experts on willpower, “The longer people have been awake, the more self-control problems happen.”

That makes sense. As the day goes on, we’re bombarded by other things demanding our attention. Staying disciplined in the face of those distractions can be daunting.

But the second reason really resonated with me, and captured how I felt during this month.

Starting your morning by tackling challenges head-on will help encourage similar behavior throughout the day. And, it turns out, there’s a wealth of research to back up this idea as well. People who do hard things first tend to procrastinate less and get more done.

Each of these workouts was physically and mentally exhausting. But the moment I finished them, I felt a sense of accomplishment, and that I was starting my day on the right foot. I also found it was then easier to stick to the meal plan throughout the day. With such a strong start, you’re inclined to continue that momentum.

Get That Hard Workout Out of the Way 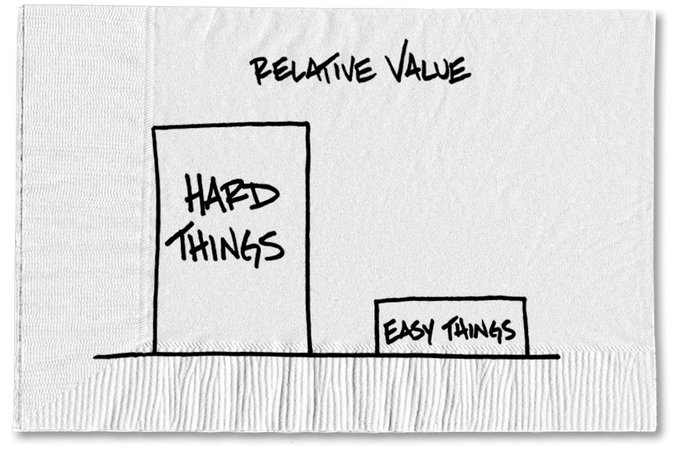 The more you push, the more you’ll get back. (Credit: Carl Richards)

Even if you’re not a morning person, try the morning workouts for a week and see how it feels. You’ll likely be tired from the lack of sleep the first day or two, but your body will start to calibrate accordingly.

Perhaps you’ll find it has a positive impact on the rest of your day. Or maybe it won’t. But then at least you’ll know for sure what works best for you.