Day 9: Bundling Up, Audio Books, And Why I Married My Wife

Dark mornings will forever remind me of two things: that first time you have to wake up early for the first day of school after a long summer break, and heading to the airport. For huge parts of my life, that would be the only thing that would get me out of bed early.

I’ve gotten used to waking up in the dark. It’s leaving the house in the cold that still gets me. Putting on shorts, a t-shirt, then warm-up pants, a hoodie, then a parka and gloves every morning is tiring. I should have waited until the summer to do this, then I could have just skipped to the gym in shorts, not a care in the world. Oh well. 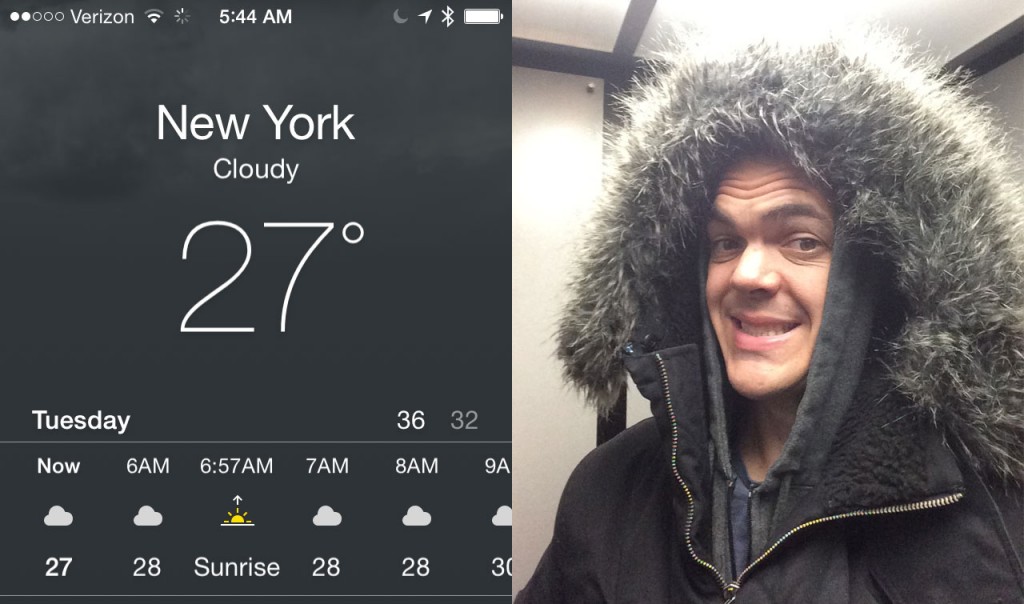 The only thing more serious than this workout is my parka.

Whisper in My Ear for Awhile

These workouts are so long, I’ve been finishing two or more podcasts each day. I decided to start going through my Amazon wishlist and buying the audiobook for each. I should be able to get through an average book in about 3 days. In the spirit of continued self improvement, the first one I chose was is The Obstacle is the Way by Ryan Holiday.

I’ve listened to interviews with Ryan previously, so I had known the overall premise of the book. It’s about stoicism, and more broadly, how you choose to deal with the challenges and obstacles that arise in life. I’ve made it a third of the way through already, and I’m enjoying it so far. Mr. Holiday has a pleasant voice to listen to as you push through more than 600 calf raises (feel free to add that to the book jacket, Ryan).

The Genius of My Wife

Every night my wife watches me gulp down my casein protein shake. Short lesson: Milk has two main proteins, casein and whey. Casein is much more abundant in milk, and is digested slowly, making it ideal for taking right before bed. Casein is fairly thick when mixed with water, and gets thicker the longer it sits. So I usually add water, shake it up, then drink the frothy concoction in a few big gulps. It has no flavoring or additives, so it tastes like thick, foamy whole milk.

My wife wanted a taste, which I was happy to provide. Her immediate reaction was that I should add cinnamon, which would make it taste sort of like horchata (a popular Latin milky drink typically made with rice, vanilla, and cinnamon). I added some right away, and she was right! It made the shake much more delicious. Cinnamon also has it’s own health benefits, so from now on, this is how I’ll have my shake. My wife is brilliant. Call the Nobel Prize people!

It may have been the loss of sleep, but I  forgot to set my Fitbit at the start of each section today. This meant I had to manually enter the workout times. All the information is accurate, but we lose the pretty dashboard graphic I usually display. I’ve also been told the stats are the “boring part of the blog” so I’m sure you’re all really broken up about it.