Today was by far the hardest one I’ve had. This challenge almost beat me.

Just as I got cocky yesterday and declared my confidence in being able to complete all 30 days, I woke up this morning not feeling well with what I can only guess was some sort of food poisoning or stomach virus. I’ve eaten the same thing every day for the last two weeks and prepared everything I’ve eaten myself, so this was definitely unexpected. But I felt nauseous, and had a severely upset stomach. Under any other circumstances, I would have definitely skipped working out and gone back to bed.

What Are The Rules of This Challenge Anyway?

Today was to be Leg Day yet again, which is the hardest workout. I debated what to do and what fit within the self-defined rules of the Rock’ing Challenge. Could I skip my workout, and make it up on Sunday (rest day)? If I could make it to the gym, was it alright to shuffle around the workouts and instead do Arms, the shortest and least taxing workout? I hadn’t really thought through these sort of tradeoffs when I started, and wasn’t sure what I would consider to fit into the spirit of this challenge. Or was this just me trying to rationalize not pushing myself?

If I didn’t make it today, should I just stop altogether? Should I take pride in making it half-way through, but consider myself beaten and pack it in? If I deviated from the original plan, it felt like it would be a failure. Everything I considered felt like rewriting the rules I had in mind when I started, so I dragged myself out of the house, intent on sticking to the original plan

The universe did not make it easy. It was pouring rain, making for a terrible walk to the gym. A block from my destination I stepped in a puddle, soaking my toes. This wasn’t going well.

My time at the gym started with standing shoeless in the locker room, using the hair dryer to dry my wet socks and sneakers. When things were officially downgraded from wet to just damp, I hopped aboard the elliptical and got to work. Surprisingly, I started to feel better during the cardio. I think just taking my mind off of it helped quite a bit.

As soon as I done I was still feeling nauseous, a less than perfect condition for having to eat 10oz of cod, 2 hard boiled eggs, and two cups of oatmeal. I normally squeeze two lemon wedges on my cod before I eat it, and it turned out the smell of the fresh lemon actually helped relieve my nausea. So that was helpful.

Feeling somewhat better, I started the leg workout. While I didn’t skimp on any weight or effort, I did rest more in-between sets. The weight training took 106 minutes, as opposed to the 82 minutes Leg Day took this past Saturday. That seemed like the right trade-off.

By the time I was done, I was exhausted. But I was glad I finished. Under normal circumstances, I wouldn’t suggest you push yourself like this when you aren’t feeling well. Rest is important. But this month is far from what could be considered normal.

Would Dwayne “The Rock” Johnson have pushed himself, or would he have let his body rest?

In 2013, in the middle of a Wrestlemania match he tore his “abdomen & abductor muscles off the bone.” He went on and finished the entire match, all without telling his wrestling partner John Cena what happened until after it was over. Ouch. 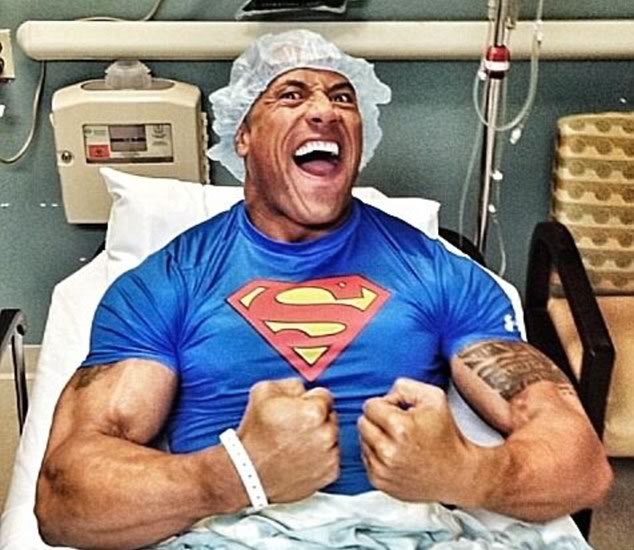 So I don’t think there is a question he wouldn’t have let an upset stomach interrupt his training. Apparently eating and training like The Rock for 30 Days is nothing compared to actually BEING The Rock. Hopefully just a little of that toughness is wearing off on me.

I was so traumatized reliving my workout that I forgot to add the daily stats. Overall a bit down from usual, but that’s to be expected from almost dying.